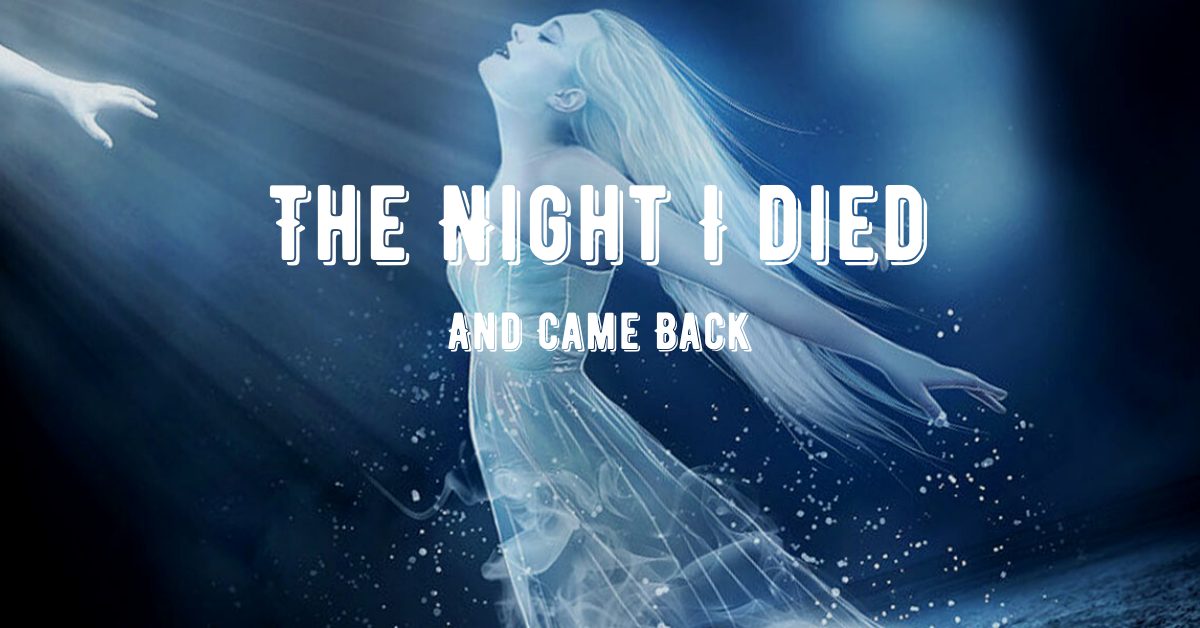 My night with Near-Death

Many of us wonder what happens to us when we die. Often wondering what the experience is like. Where do we go and do we feel pain when we die? For many, the thought of dying could be a scary idea. For others, such as myself, we look at it as a gift to release us from our created expressions.

What is a Near-Death Experience?

The term “near-death experience” (NDE) was coined in 1975 in the book Life After Life by Raymond Moody, MD. By definition, an NDE is a person who is either clinically dead, near death, or in a situation where death is expected. These situations usually occur from having a serious illness, being involved in an accident, sustaining an injury, during surgeries, and even during a life-altering event.

My Experience with Near-Death

It was a normal warm Monday night. I was resting on my couch ponding on the complexities of the universe and life. At this particular moment, I was thinking about how little we truly understand about who we are and the universe we live in. Since it was a nice night out, I decided to go to my outside patio to sit in my chair and gaze upon the night sky.

Without any warning, I grew extremely tired. At first, I felt as if I needed to go to bed immediately, but I couldn’t move off the chair. As I began to close my eyes, a large amount of energy started to fill my body. The vibration became increasingly tense. As I began to focus on the energy filling inside I noticed that my organs were slowing down.

The Old Must Die

Every organ in my body began to shut down as the vibration got stronger. As my body became increasingly heavier, I started repeating “The old must die”. I don’t know why I started repeating this phrase, it was just automatic as if I wasn’t in control of my thoughts. Just then my thoughts started to become quiet as my brain was shutting down. My heart rate decreased as it went from a normal pace, becoming slower as the seconds ticked by until it came to be completely still and everything was dark.

In an instant, I was out of my body and the vibration that I was experiencing was very high and peaceful. Right after that, I grew to be very large! So large, in fact, that the universe became microscopic. It was then I realized where I was at, I’ve been here before, I was in the void.

If You Could Only See

It was dark where I was at. Yet at the same time, I felt extremely peaceful. I had no physical body, just my mind to sit with and think. I could see everything and anything, even what was happening. It was a conscious knowing that everything was perfect the way it is. The feeling was indescribable. There was an absence of worry and concern as I knew everything was ok. It was a feeling of unconditional understanding and unity within myself and the existence of all things. Everything was just perfect. I just sat with this feeling and had no intentions to do anything else or than just experience this perception. Although it was a much short time, it felt as if I was there for a very long time.

Despite the fact that I felt trillions of miles away from earth, I could still see and sense my body sitting in the chair on my porch. I could hear the sounds of the cars as they drove by and I knew my body was safe. It was then that I had a thought, “I have to go back now, I have things to do”. Strangely enough, this was spoken at the same time as I heard “Do I want to stay here?”.

It was one of the weirdest feelings to hear both a question and an answer at the same time without either one being spoken. I knew then that I had to leave. As I began to leave, another thought came in and had a knowing that this will happen six more times. Just as I thought “wait, what?”, I snapped back into my body and felt my body restart.

My body rebooted like a computer. My heart started working again and everything turned back on like someone flipped a switch. It took me over two hours to move from the chair once I came back. My eyesight was blurry and I couldn’t see. I was emotionless for the rest of the evening and sat with myself over what just occurred. This was something I needed to comprehend.

The next day I was still feeling without emotion. My heart was normal and I just felt different. Being a person that seeks truth, I wanted to understand more, so I went to meditate. After coming from meditation, which was wildly unsuccessful and has been all week, I sat on the couch thinking. It was then that I heard an extremely loud high pitched frequency coming from above my head and into my body. I started to see flashes of blue light that accompanied this sound. Suddenly I was paralyzed and I couldn’t move. My left arm curled up as if I was having a seizure as I was now captured by this energy. My mind and thoughts were clear and had a complete understanding of what was happening.

The frequency repeated itself three times and lasted for about 3-4 minutes each. Each occurrence felt stronger than the next. The last one was actually so strong that it made me orgasm towards the end. Once I was released, I gained full control of my body. Other than me becoming completely uncoordinated, there is no damage to my body.

What Does this mean?

It has been almost a week now and I feel like a completely different person. I see things in life differently. Geometric patterns are everywhere now. Trees, houses, people all appear to be in geometric form. There is an insatiable desire for an understanding of Physics and Quantum Physics, even to go as far as learning how to solve equations. Even my senses are heightened a bit and feel as if I have grown spidey senses. I’m not going to lie, although I know that I’m not going to start climbing walls and swinging from webs, it would be a pretty cool power to develop. Nonetheless, how I am experiencing life has changed for me.

Vibration, in the way I see and feel the world, is now on a different scale. I’ve always known that the earth, like stars and other planets, was a highly advanced living being that I felt connected to, but I feel more connected to Earth, the universe, and life more than ever before. The feeling is strong, and although my body is still having a rough time adjusting, it feels pretty unshakable

Where Will this Lead me?

I honestly don’t know where this experience will take me or why it even occurred. To be open with you, it’s actually not my concern. I’m always focused on the present moment and although this experience is definitely one for the books, I prefer to focus on life itself. It is without assumption that we understand that there was a purpose for why this happened, and when the time comes, it will lead me to where I need to go.

As we grow and evolve, we must take our experiences at hand and learn to adapt to them. We often push too hard trying to gain new experiences instead of just allowing them to happen. It’s never a race or competition between people to gain knowledge and wisdom, it is the understanding of where we are in life and what we are capable of working on. I know one day I’ll understand the why’s, but as for now, this near-death experience was definitely an experience that has changed my life.

Fenwick. P. (2004). Science and Spirituality: A Challenge for the 21st Century.
The Bruce Greyson Lecture from the International Association for Near-Death Studies
2004 Annual Conference

Parnia, S., et al. (2001). A Qualitative and Quantitative Study of the Incidence,
Features and Aetiology of Near-Death Experiences in Cardiac Arrest Survivors.
Resuscitation, 48, 149-156.

Click here to Join us for the Transcendental Transformation Radio Show

Miss Raina has helped thousands of individuals from all over the world find their purpose and mission. Having several degrees in Oriental & Alternative medicine, as well as her ever-evolving purpose to gain higher consciousness, Miss Raina has created many outlets to share the wisdom and truths of the universe. Her radio show, Transcendental Transformation, and the IAMevolution program are ready for those who truly want to seek wisdom and truth and help raise the vibration of our third-dimensional world.